On October 16, 2019 a conference "Spiritual harmony - the key to unity and stability" was held in the Nur-Sultan.


The main goal is to unite and rally all sitizens of Kazakhstan around common values and promote interethnic and interfaith harmony.

MOVEMENT OF SPIRITUAL CONCORD IN KAZAKHSTAN 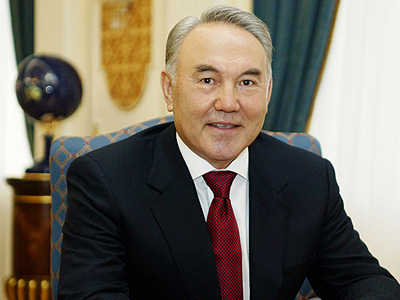 Nursultan Nazarbayev, President of Kazakhstan, addressing a conference, dedicated to the 10th Anniversary of “Kazakhstan 2030” Strategic Plan, notes: “Kazakhstan is fulfilling a function of one of the important centers for intercultural and interreligious dialogue today. We conduct the Congresses of leaders of world and traditional religions. And this mission of Kazakhstan finds support on the part of other countries and international organizations, the US in particular”.
Movement of Spiritual Concord brings its strong contribution in this process. 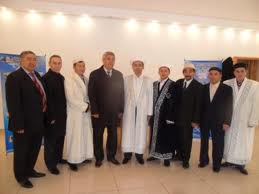 It was the first year of Kazakhstan as a sovereign, secular and democratic state when the First World Congress of Spiritual Concord under the patronage of Nursultan Nazarbayev took place in Almaty in October, 1992. The Congress convened the representatives of all religions, spiritual schools, humanitarian and social movements.
Such principles as “Let’s have respect for faith!”, “Differences without Discord!”, “Co-service and Mercy!” became foundational for the work of the World Congress of Spiritual Concord and the International Public fund, established at it. 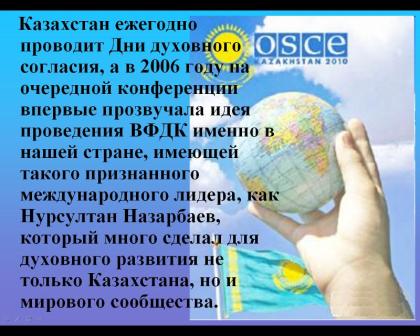 n the manifest accepted the participants of the Congress appealed to announce October, 18 to be the Day of Spiritual Concord, the day of moratorium on conflicts and collisions, the day of searching for reconciliation, initiating understanding between people, the day of mercy and help towards fellow-creatures. Since then the Day of Spiritual Concord is annually celebrated in Kazakhstan on October, 18 and it is a socially significant date. Assembly of People of Kazakhstan, International fund “Congress of Spiritual Concord” and International association “Peace through Culture” are the direct organizers of the event.  All governmental agencies render their whole-hearted support, and primarily the committee on Ecclesiastical affairs of Ministry of Justice.
Large-scale events, which are not within the framework of one day, lasting sometimes for the whole week, include:
1. Сeremonial service, prayers about peace and concord in all mosques, churches and preaching houses of different confessions;
2. Сarrying out charity events, provision of assistance to vulnerable social groups;
3. Panel discussions with the participation of representatives of government institutions, social, religious, national and cultural associations, men of art and science;
4. Concerts of classical and spiritual music, thematic exhibition of books, works of art and etc.
For the first time ever two state channels “Kazakhstan” and “Khabar” broadcasted four -hour marathon, dedicated to the Day of Spiritual Concord in 2005.
Annually in the mid-October our like-minded colleagues and associates from different countries of the world gather in Astana to discuss the most pressing and vital problems of modernity and to identify their possible participation in the solution of these problems. 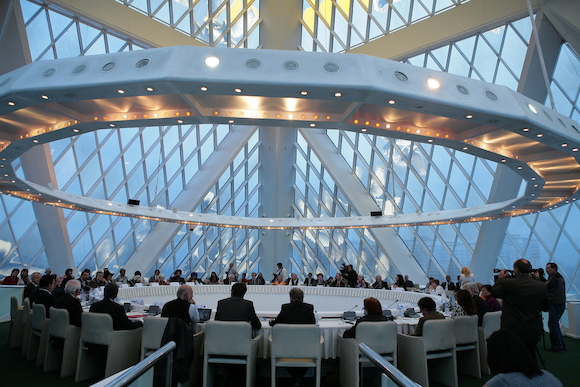 Among vital problems of our being and spirituality, which we discussed over recent years, there were such topics as “Future of the world: in accordance with civilizations and religions”, “Historical, cultural, and religious traditions are the basis of spiritual concord of the nations of Eurasia”, “The ways of preserving and strengthening international and interreligious concord in the modern world”.

The topicality of these problems is defined by the spiritual unity of people of different cultures and confessions which is a strategic factor, providing stability and sustainable development of separate states as well as large world regions.
Unfortunately, to this day the mankind abuses power methods of solution of problems – from moral coercion to physical destruction. In this case the only way to solve problems is the way of dialogue, but without the intention to confirm one’s point of view as the only possible option.
Leo Gumilyov, the distinguished Russian scientist and thinker, after whose name the Eurasian University is named in Astana, deeply honored with people in Kazakhstan, said the wonderful words below: “One must not make all people assimilate, one needs to learn how to live in concord with them”.
Common interests of all peoples of Eurasia are in the search of ways to unite on the ground of respect for all historically formed differences between peoples, on the ground of respect for faith and general for all religions ethical principles.
Spiritual harmony in our understanding does not mean unification, consistency, uniformity, or creating some common religion. But we hold together and seek in religion not the opposition of people to each other, but the unifying principle. All religions indeed are based on simple and comprehensible principles for all people around the world. They are the following: love your neighbor, help the afflicted, be pitiful to the poor and miserable, and follow the eternal commandments. That's the spirit of space which is the general area that brings people together.
We are united by a peremptory rejection of any form of violence. The true faith has nothing in common with violence, hatred, xenophobia, and all the more with terrorism. The new millennium should be marked by the celebration of humanity, respect for faith, kindness and mercy.
We are proud that Nursultan Nazarbayev, the President of Kazakhstan, who personally greeted the participants of those Days and all Kazakhstani people notwithstanding their nationality and confession, appreciated the role and significance of movement of Spiritual Concord. He welcomed the delegation of the Congress of Spiritual Concord and International Association “Peace through Culture” in his official residency. Only spiritual and ethical rebirth of a man can save the world from destruction. We are sure that  spiritualization of the world is the common objective for all sensible people in both present and future. We must preserve the achievements of the materialistic age, and add to them the basics of our former life – an ethic and  spiritual constant from the spirit, which is Spiritual Culture, - that gives them a more solid and unshakable foundation. In order to understand and accept this novelty, it is important not to reduce everything to the appeals for spirituality. One cannot make a turn in history with the help of these appeals. We need to make an evolutionary leap in human consciousness to  more perfect and harmonious forms of co-existence.
The World Forum of Spiritual Culture was held with this aim in Astana, the capital of Kazakhstan, in October, 2010. More than 500 delegates of brainpower from 70 countries of the world came to attend it. The Forum was organized under the auspices of Nursultan Nazarbayev, the President of Kazakhstan.
The Forum turned attention of the world community to the vital necessity to overcome the global crisis of spirit and morality. It urged everyone to mobilize their inner strength and physical ability to restore harmonious relations between people, a man, space and nature, states, nations and the international community, an individual and the Higher World.
The resolution, adopted by the Forum, says that new time dictates to appeal to wisdom, good will, love, compassion, perfection, and purity, as the supreme manifestations that carry the light of spiritual truths and transform human consciousness. In order to establish our world according to worthy principles, it is necessary to enlighten consciousness of all humanity as a single world body and give rebirth in regard to the values  of Spiritual Culture.